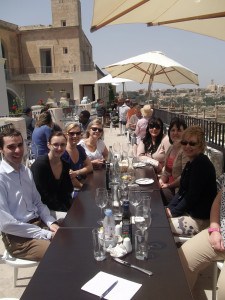 Meet Kathryn from Kirker Holidays at Terminal 1 Manchester Airport at 0400hrs for an Easyjet flight to Malta.

Arrived in Malta and took a minibus transfer to the island of Gozo including a short 30 minute ferry crossing to the small island arrived at the 5 star Ta Cenc Hotel for a fabulous five course meal and then an inspection of the hotel rooms and facilities of the hotel.  The hotel would appeal to customers who want a get away from it all and an interest in walking and offers a regular shuttle bus to the nearby beach.

After leaving Ta Cenc holiday we had short guided tour of the island of Gozo visiting Xlendi Bay, Dwejra, Fungas Rock and the Azure window which gave us plenty of photo opportunities.

After the island tour transferred back to Malta by ferry and taken to the hotel Radisson Blu Resort & Spa in Golden Sands in the north of the island.

Upon check in to our suite rooms with sea view a site inspection of the hotel .

In the evening we were transferred to the resort of St Juliens and a meal taken at Zest restaurant.

Nightlife in St Julian’s & Paceville, Malta
Come the evening, and it seems the whole of St Julian’s is at the waterfront, having a good time. The restaurants are busy and the whole area has a real buzz about it. You can choose from a wide variety of restaurants, from traditional to Chinese take-aways . As the night draws on, there is a general move towards Paceville, the club capital of Malta. Paceville puts the emphasis on fun, with pubs and cafés spilling onto the streets and the clubs playing their music hot and loud. It’s fast, fun and unlike a lot of Mediterranean club areas, very good-natured

After breakfast we were transferred approximately 35 minutes journey to the capital Valletta, this was my favourite as Valletta has so much to offer in such a small city there are plenty of open air cafes and restaurants to choose from and the architecture and history of the city is endless.  We had a guided tour of the stunning St Johns Cathedral and then took in half an hour screen show of the Malta Experience which gives you so much insight to the history of the island of Malta.  Lunch was taken at a restaurant in Valletta called Palazzo Preca Restaurant which had fabulous lamb shanks and fish at reasonable prices.

After lunch we visited Casa Rocco Picolla and Upper Barakka Gardens which gives amazing views of the marina and beautiful buildings again another fantastic photo opportunity.

Had a site inspection of the hotel Pheonicia which is a five star superior hotel just a stones throw from the city of Valletta.

Evening meal was hosted by the Pheonica hotel and after dinner drinks in the lounge bar with a pianist and singer to set the relaxed mood.

Today we were transferred to the south east of the island approximately 25 minutes to a beautiful fishing village of Marsaxlokk the village is approached via a long, narrow, straight road with vineyards on both sides.  The bay is memorable for the many colourful, traditional fishing boats called luzzu . The painted eyes on these luzzus are believed to protect the boats from danger. Tourists visit the town for the picturesque photo opportunities of the bay filled with colourful fishing boats, many seafood restaurants and the very busy Sunday market that sells everything from fish, local produce and groceries to souvenirs, clothing and footwear.

We were then transferred to Mdina which is the old capital of Malta. Mdina is a medieval walled town situated on a hill in the centre of the island and is often known as the silent city. The town is still confined within its walls, and has a population of just over three hundred and the village of Rabat, which takes its name from the Arabic word for suburb, and has a population of over 11,000.

We took in a site inspection at the boutique hotel  Xara Palace which consists of just 27 individually beautifully furnished rooms.

Our last evening meal was hosted at our resident hotel Radisson Blu hotel offering us a buffet meal and a private terrace was provided for ourselves to see the Fireworks Festival at Golden Bay.

After breakfast an early transfer to Malta airport for our flight back to the UK with Easyjet.

My Experiences of Vietnam & Cambodia
We use cookies on our website to give you the most relevant experience by remembering your preferences and repeat visits. By clicking “Accept All”, you consent to the use of ALL the cookies. However, you may visit "Cookie Settings" to provide a controlled consent.
Cookie SettingsAccept All
Manage consent

This website uses cookies to improve your experience while you navigate through the website. Out of these, the cookies that are categorized as necessary are stored on your browser as they are essential for the working of basic functionalities of the website. We also use third-party cookies that help us analyze and understand how you use this website. These cookies will be stored in your browser only with your consent. You also have the option to opt-out of these cookies. But opting out of some of these cookies may affect your browsing experience.
Necessary Always Enabled
Necessary cookies are absolutely essential for the website to function properly. These cookies ensure basic functionalities and security features of the website, anonymously.
Functional
Functional cookies help to perform certain functionalities like sharing the content of the website on social media platforms, collect feedbacks, and other third-party features.
Performance
Performance cookies are used to understand and analyze the key performance indexes of the website which helps in delivering a better user experience for the visitors.
Analytics
Analytical cookies are used to understand how visitors interact with the website. These cookies help provide information on metrics the number of visitors, bounce rate, traffic source, etc.
Advertisement
Advertisement cookies are used to provide visitors with relevant ads and marketing campaigns. These cookies track visitors across websites and collect information to provide customized ads.
Others
Other uncategorized cookies are those that are being analyzed and have not been classified into a category as yet.
SAVE & ACCEPT